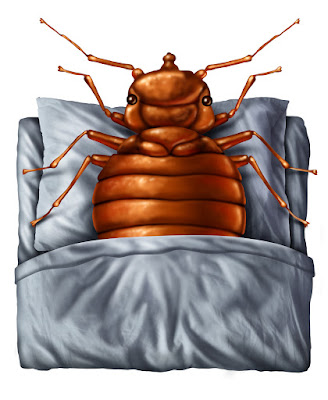 You might think you know all there is to know about bed bugs. Creepy? Yep. Icky? You bet. But the truth about these creatures might just be more horrifying than the notions you have about them. Warning: reading this article may make you want to immediately stop and clean, or even burn, your mattresses.

Many people believe they're only active at night which is a common misconception. They are known to stay out of view during daylight hours when humans are active. What draws them out from their hiding places of box springs, mattresses, or even behind wallpaper is the scent of carbon dioxide that we breathe out while we sleep.

But they're even sneakier than that. The reason that many people sleep right through the night when bed bugs feed is because their saliva actually numbs the skin around where they bite, and so the feeding process is nearly painless. Often, you won't know you have an infestation until you wake up and see the telltale bites, generally in small clusters or in a row. On top of that, bedbugs can go extended periods of time without needing to feed, meaning death from starvation is uncommon. In fact, they can survive for up to a year without feeding once.

Bed bugs are also perhaps one of the most well-traveled insects. The ones that may be crawling around in the mattresses in Georgia may have originated from a motel in New York or a bed and breakfast in Colorado because they are easily transferred in clothing or suitcases. But they are extremely well-traveled within houses as well, and will find just about anywhere to call a home including your coffee maker, your toaster, or even your alarm clock can become where they decide to take up residence.

But there is good news when it comes to bed bugs. Even though it seems like it, they aren't the all-powerful and evil creature they seem like they are. Although it's extremely hard to starve them to death and despite the fact that they don't even die out in the cold winter months like others of their house-dwelling cousins, bed bugs are not indestructible. There are some simple and obvious precautions to take to avoid infestations, such as regularly cleaning your mattresses.

If you do get an infestation, you should be more afraid of the scams surrounding them than of the bugs themselves. For example, because of the way the industry is regulated, a number of products claim to be effective against bedbugs without proof, so be wary of certain labels. Likewise, insect foggers are ineffective against bedbugs and can pose more danger because of the chemicals and residue they leave in your house, or may even cause bed bugs to disperse, making your problem worse. The best way to deal with bedbugs crawling in your mattresses is the tried and true method: arming yourself with a fly swatter and calling pest control.