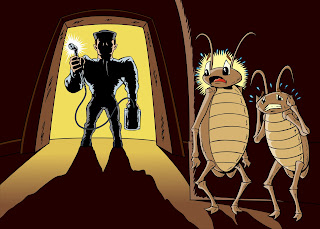 Insects (from Latin insectum) are pancrustacean hexapod invertebrates of the class Insecta. They are the largest group within the arthropod phylum. Insects have a chitinous exoskeleton, a three-part body (head, thorax and abdomen), three pairs of jointed legs, compound eyes and one pair of antennae. Their blood is not totally contained in vessels; some circulates in an open cavity known as the haemocoel. Insects are the most diverse group of animals; they include more than a million described species and represent more than half of all known living organisms. The total number of extant species is estimated at between six and ten million; potentially over 90% of the animal life forms on Earth are insects. Insects may be found in nearly all environments, although only a small number of species reside in the oceans, which are dominated by another arthropod group, crustaceans, which recent research has indicated insects are nested within.

Nearly all insects hatch from eggs. Insect growth is constrained by the inelastic exoskeleton and development involves a series of molts. The immature stages often differ from the adults in structure, habit and habitat, and can include a usually immobile pupal stage in those groups that undergo four-stage metamorphosis. Insects that undergo three-stage metamorphosis lack a pupal stage and adults develop through a series of nymphal stages. The higher level relationship of the insects is unclear. Fossilized insects of enormous size have been found from the Paleozoic Era, including giant dragonflies with wingspans of 55 to 70 cm (22 to 28 in). The most diverse insect groups appear to have coevolved with flowering plants.