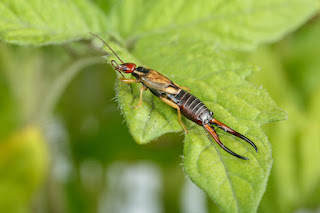 Earwigs are abundant and can be found throughout the Americas and Eurasia. The common earwig was introduced into North America in 1907 from Europe, but tends to be more common in the southern and southwestern parts of the United States.  The only native species of earwig found in the north of the United States is the spine-tailed earwig (Doru aculeatum), found as far north as Canada, where it hides in the leaf axils of emerging plants in southern Ontario wetlands. However, other families can be found in North America, including Forficulidae (Doru and Forficula being found there), Spongiphoridae, Anisolabididae, and Labiduridae.

Few earwigs survive winter outdoors in cold climates. They can be found in tight crevices in woodland, fields and gardens. Out of about 1,800 species, about 25 occur in North America, 45 in Europe (including 7 in Great Britain), and 60 in Australia.

Posted by American Pest Management at 11:30 AM