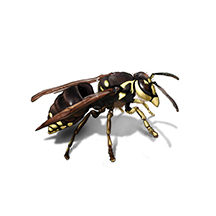 Hornets (insects in the genus Vespa) are the largest of the eusocial wasps, and are similar in appearance to their close relatives yellowjackets. Some species can reach up to 5.5 cm (2.2 in) in length. They are distinguished from other vespine wasps by the relatively large top margin of the head and by the rounded segment of the abdomen just behind the waist. Worldwide, 22 species of Vespa are recognized. Most species only occur in the tropics of Asia, though the European hornet (V. crabro), is widely distributed throughout Europe, Russia, North America, and Northeast Asia. Wasps native to North America in the genus Dolichovespula are commonly referred to as hornets (e.g., baldfaced hornets), but are actually yellowjackets.
Like other social wasps, hornets build communal nests by chewing wood to make a papery pulp. Each nest has one queen, which lays eggs and is attended by workers that, while genetically female, cannot lay fertile eggs. Most species make exposed nests in trees and shrubs, but some (such as Vespa orientalis) build their nests underground or in other cavities. In the tropics, these nests may last year-round, but in temperate areas, the nest dies over the winter, with lone queens hibernating in leaf litter or other insulative material until the spring. Male hornets are docile and do not have stingers.
Hornets are often considered pests, as they aggressively guard their nesting sites when threatened and their stings can be more dangerous than those of bees.
Read more, here.
Jeff Verges/Owner/Operator
742 Santa Anita Court
Eugene, OR 97401
541-688-0580 Eugene
503-371-8373 Salem
Contact Us
Website
Posted by American Pest Management at 10:00 AM