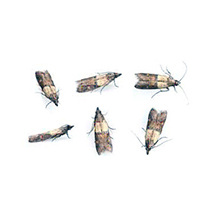 Moths are a paraphyletic group of insects that includes all members of the order Lepidoptera that are not butterflies, with moths making up the vast majority of the order. There are thought to be approximately 160,000 species of moth, many of which have yet to be described. Most species of moth are nocturnal, but there are also crepuscular and diurnal species.

Nocturnal insectivores often feed on moths; these include some bats, some species of owls and other species of birds. Moths also are eaten by some species of lizards, amphibians, cats, dogs, rodents, and some bears. Moth larvae are vulnerable to being parasitized by Ichneumonidae.

Baculoviruses are parasite double-stranded DNA insect viruses that are used mostly as biological control agents. They are members of the Baculoviridae, a family that is restricted to insects. Most baculovirus isolates have been obtained from insects, in particular from Lepidoptera.

There is evidence that ultrasound in the range emitted by bats causes flying moths to make evasive maneuvers. Ultrasonic frequencies trigger a reflex action in the noctuid moth that causes it to drop a few centimeters or inches in its flight to evade attack, and tiger moths can emit clicks to foil bats' echolocation.