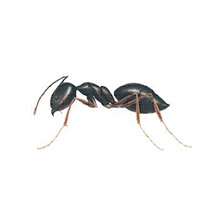 An ant's head contains many sensory organs. Like most insects, ants have compound eyes made from numerous tiny lenses attached together. Ant eyes are good for acute movement detection, but do not offer a high resolution image. They also have three small ocelli (simple eyes) on the top of the head that detect light levels and polarization. Compared to vertebrates, ants tend to have blurrier eyesight, particularly in smaller species, and a few subterranean taxa are completely blind. However, some ants, such as Australia's bulldog ant, have excellent vision and are capable of discriminating the distance and size of objects moving nearly a meter away.

Two antennae ("feelers") are attached to the head; these organs detect chemicals, air currents, and vibrations; they also are used to transmit and receive signals through touch. The head has two strong jaws, the mandibles, used to carry food, manipulate objects, construct nests, and for defence. In some species, a small pocket (infrabuccal chamber) inside the mouth stores food, so it may be passed to other ants or their larvae.